Scandlines is based on a strong German-Danish collaboration during more than a hundred years. From state-owned to a private company – from black to green.

Collaboration in spite of wars and a divided Germany

In 1903, the first rail ferry crossed the Baltic Sea between Warnemünde in Germany and Gedser in Denmark. At the time, the ferry was a steamboat. Today, two hybrid ferries operate the route – one of them even has a rotor sail. The route remained in spite of two world wars and a divided Germany, which for 40 years resulted in limited travel activity on the route.

In 1963, an additional ferry route between the two countries was established – the so-called Beeline between Puttgarden in Germany and Rødby in Denmark. The plans to have a ferry crossing there dated a hundred years back, but wars had prevented the plans from being realised. Once established, the Beeline became very popular, and in 1988, 100 million passengers had used the crossing.

In 1989, the Wall between the two Germanys fell – and with the opening came new possibilities to collaborate. In 1993, the two ferry operators shipping companies, which had operated in east and west, merged into the company DFO. In Denmark, the state-owned shipping company was turned into a limited company, and in 1997, the company changed its name to Scandlines.

As the economy in the former Eastern Europe improved, the easterly route between Warnemünde and Gedser bloomed. In 1995, the route moved from the port in Warnemünde to the port in nearby Rostock.

In 1997, the strong collaboration led to a joint investment in four new ferries for the Beeline. The Germans delivered two ferries and the Danes another two. All four ferries are doubled-ended RoRo ferries.

In 1998, the two shipping partners, German DFO and Danish Scandlines, merged into the company Scandlines AG. The owners were Deutsche Bahn and the Danish Ministry of Transport. In 2007, Scandlines became a private company.

Our journey towards emission free ferries

In 2013, we took the first step towards emission free ferries, when we converted the Puttgarden-Rødby ferry M/V Prinsesse Benedikte to hybrid propulsion in order to reduce CO2 emission. The hybrid system is similar to that of hybrid cars, where petrol or diesel is combined with electricity. The conversion was successful and in 2014 we converted the three other passenger ferries on the route to hybrid propulsion.

Based on the good results with the hybrid ferries on Puttgarden-Rødby, we decided also to go for hybrid ferries for our Rostock-Gedser route. When put into service in 2016, they were the largest hybrid ferries in the world. 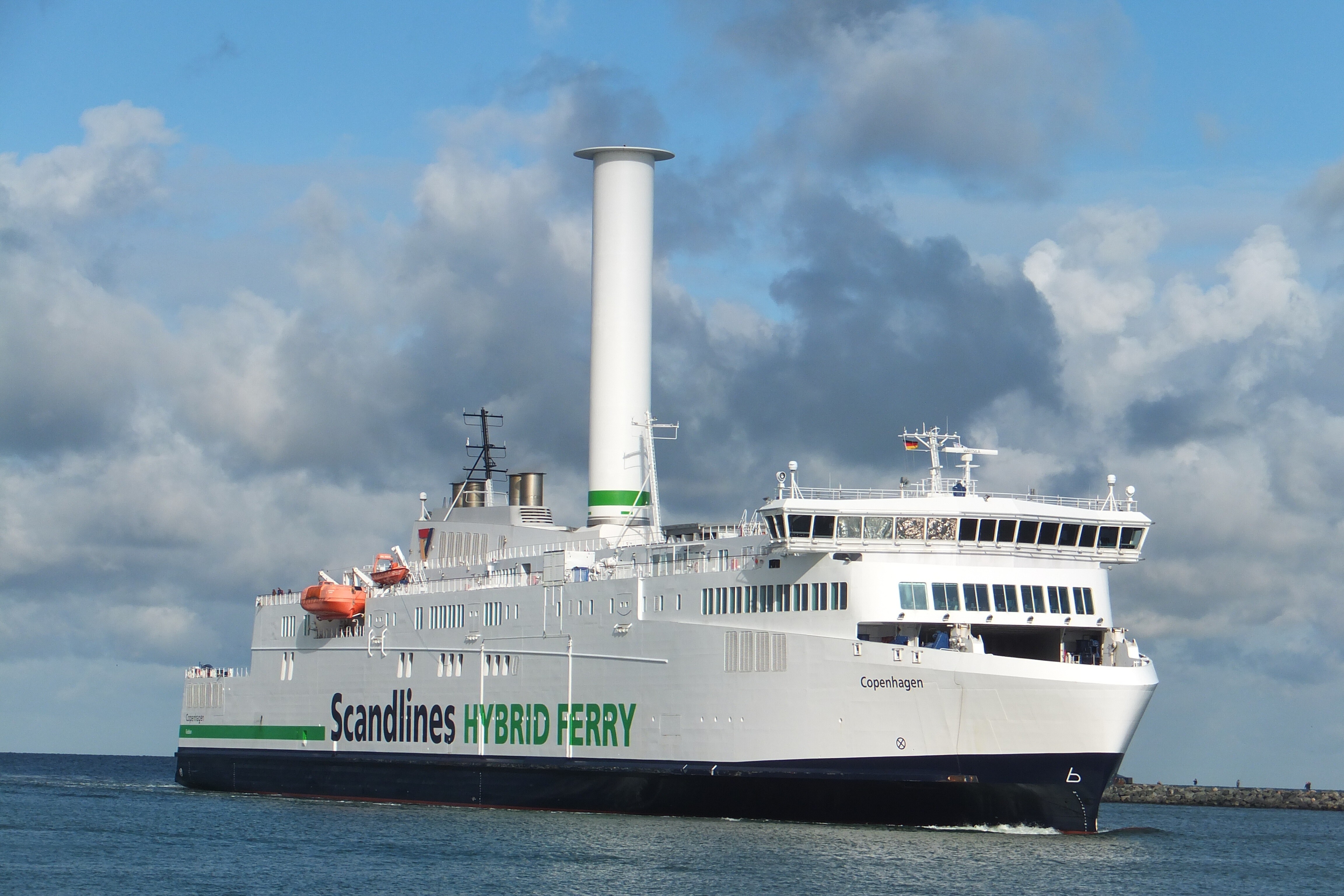 In 2020, we took further steps towards our green agenda. Under water, we installed new thrusters (thrusters drive the ship forward) on two of the four passenger ferries on the Puttgarden-Rødby route. The new thrusters reduce both underwater noise and CO2 emissions. In 2021 and 2022, the two other passenger ferries on the route got new thrusters. On the Rostock-Gedser route a rotor sail on the hybrid ferries M/V Copenhagen and M/V Berlin, which further reduces the ferries' CO2 emission, is a very clear sign of our journey towards emission free ferries.

Scandlines is based on a strong German-Danish collaboration during more than a hundred years.